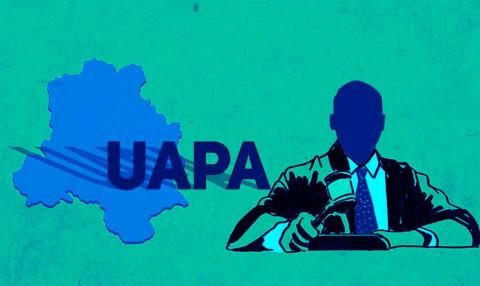 Implication of 102 persons under the dreaded anti-terror law in the recent communal riots in the BJP ruled Tripura state has put spotlight on the gross abuse of the UAPA (the Unlawful Activities Prevention Act, 1967) as amended to date to suppress voices of dissent or banner of alarms against the repression of innocents. Tripura communal riots, viewed as a reprisal against anti-minority skirmishes in Bangladesh in the wake of ten-day long Durga Puja (Dussehra) triggered by Vishwa Hindu Parishad (VHP), a hardcore right wing Hindutwa organization and part of enlarged Sangh Pariwar, resulted in burning of several mosques, shops and houses of particular minority community. Of the implicated persons, 100 are Muslims and rest others. With this, the misuse of the stiffest anti-terror law in BJP ruled states has reached absurd extremes. The good news is the Supreme Court has taken cognizance of it.

Since 2014, when the BJP led NDA Union Government took over, abuse of the draconian UAPA law has increased five times as per the latest reports by the National Crime Records Bureau (NCRB). In 2014, 2833 persons were implicated in the UAPA, in 2015, 3446, during 2016, 3962, in 2017, 4451, in 2018, 5102 and in 2019, 5134. Rising graph of increasing abuse of the anti-terror law against innocents and for that matter dissenters, questioning the democratically elected governments by intellectuals, media persons, civil rights activists, politicians, lawyers and others like men and women of goodwill and substance to whom the country’s interests are upper most, are misconstrued anti-national acts and such people are framed under the most draconian laws like UAPA, NSA, Sedition and so on and innocents are incarcerated without bail for using their non-violent legal and Constitutional democratic rights. This is viewed as a familiar ploy of the BJP ruled India together with its administered state governments with impunity to suppress voices of dissent to terrorise the people in order to keep them in fear just to divert public attention from the pressing problems of ever rising unemployment, unbearable inflation and growing social tensions.

Present UAPA has been shaped by six amendments, the latest in 2019, allowing individuals to be designated as terroristby the state, adding to stiffest provisions that made space for confessions to police and jail for an under-trial almost certain, with the usual assumption of an accused’s innocence until proven guilty effectively reversed. By the avowals of law enforcers and security experts, such preventive stringency is required for extraordinary threats like terror, which cannot be tackled within a legal frame meant for less consequential violations and has been around in various forms. UAPA is a version of POTA, which was modeled on TADA. During the Emergency, it was MISA.

Rulers, to quash civil liberties, human rights and muzzle free voices, have always misused these dreaded laws. Today, as never before, ever growing indiscriminate abuse of UAPA is alarming with the lower judiciary being complicit with its general reticence to grant bail, turning the incarcerated as criminals. All in gross violation of the Supreme Court of India guidelines to grant bail in all such motivated frame-up cases except in dreaded acts of terrorism and subversion. Conduct of subordinate judiciary’s common hesitancy in not granting bail in all such cases has the potential to turn India in a police state making bonfire of the rule of law based Constitutional democratic governance.

In all such cases, police has lost its sheen and emerged beyond doubt, partisan, communal, brutish, corrupt, nasty and repressive, so much for citizen’s fundamental rights to life, civil liberties, personal dignity and others as guaranteed by the Constitution of India. Police functions in gross violations of their oath of office as neutral and upright law enforcing agency and act without fear and favour. Police is a willing partner of ruling politicians to frame innocents just to settle scores as vendetta politics. People mustfight such atrocious police force to restore their faith in a functional democratic norm.